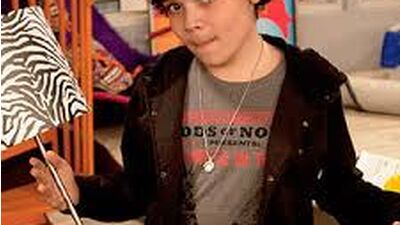 Diceneo "Dice" J. Corleone is a main character in Sam& Cat. He is Sam and Cat's next door neighbor. He is a cool and slick guy, but he is also nice. He likes selling things and making deals. Dice is a big reason for Sam and Cat's blooming babysitting business. Dice is cool, calm and collected...

I Honestly Think That All The People, Well The Main Characters From Victorious Could've Been In Sam&Cat. I Never Knew Who Cat Valentine's Brother Was, I Thought It Was Dice... Until I Read The Wiki. Dice Is Just Cat's Neighbor. My Favorite Character Is Matt Bennett, I Wish He Took His Broken Glass Song With Him To The Show Sam&Cat. I Honestly Think The Show Victorious Was Much Better Than Sam&Cat. To Wrap This Up, Both Shows Were Good, Only If They Made More Episodes, They Could Be Better!

So i met Ariana in 2017 at a meet and greet at the DW Tour and she told me the real reason S&C ended. Here we go!

Ariana was focused on her ill grandfather and also focused on "My Everything" at the time and couldn't focus on the show.

Jennette was dealing with something (Maybe her eating disorder and her mom passing away) it was too hard to do the show.

The girls both were upset and the naked leaks of Mccurdy made matters worse. Nickelodeon still supported Mccurdy but it was too much for her and she quit.

And Ariana didn't wanna be on it due to her grandfather passing.

Grande also said because they play best friends on a tv show they have to be everywhere together and when they didn't people thought they hated each other.

TMZ also lied to fans and said that Ariana was getting paid more money, which is false. AG and JM are friends, the internet makes it seem like drama is going on between the two. Also Ari supported Jennette's eating disorder and follows and likes Jennette posts on Instagram. So that's the story of S&C. I'm shocked there was no drama. Glad to hear the girls are friends.